The first real machine test flight of Daxing Airport is completed, which means what 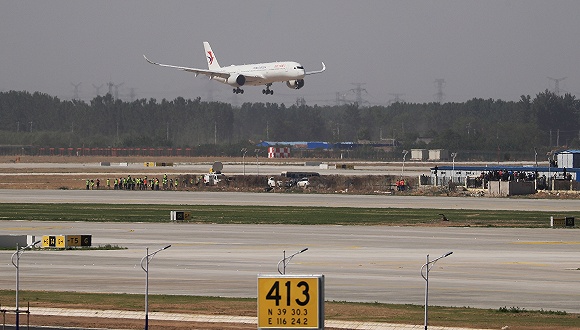 On May 13, Daxing Airport launched its first real flight test. The airlines participating in the test flight are China Southern Airlines, China Eastern Airlines, Air China and Xiamen Airlines, and will select A380, A350-900, B747-8 and B787-9 aircraft to carry out test flights.

Why did China Southern Airlines A380 fly first?

On May 13, China Southern Airlines A380 took the lead in the test flight at Daxing Airport and launched flight verification. The verification subjects include entry and exit, go-around procedures and minimum operating standards. At the same time, it will also inspect the support facilities such as runway communication, navigation, surveillance, meteorological and navigational lights, and test the comprehensive support capabilities of air traffic control, intelligence and ground service.

According to Yangguang.com, China Southern Airlines A380 captain Lu Haibing said that the A380 model is the most representative of the length, width and surface strength of all aircraft. It is the most representative model in the world, so the success of the A380 model. The test flight can comprehensively test whether Daxing International Airport has met the protection requirements of the 4F-class airport. It can be said that the A380’s take-off and landing is safely guaranteed. Daxing International Airport can also successfully guarantee the safe take-off and landing of various aircraft types in the civil aviation industry.

Daxing International Airport is the highest-ranking 4F-class airport in the airport security classification. Its runway length and the wingspan and track of the aircraft that can guarantee the landing and landing are among the highest in all current airports. Therefore, the test flight selected four representative large-scale two-aisle aircraft of four different airlines, and covered four runways to carry out “stress test”, in order to fully verify the operational support capability of Daxing Airport.

In addition to the China Eastern Airlines and China Southern Airlines, which are the base airlines of Daxing International Airport, why did Air China and Xiamen Airlines participate in the test flight?

The real machine test flight is only the first step

Although the test flight time is not long, it needs to complete a number of test contents.

The next low-visibility special test flight in August will be the highlight of the test flight at Daxing International Airport, and it is also the first time in the country to use this technology at airports. The low-visibility test flight will test the HUD RVR 75-meter technology, which represents the state-of-the-art level of low visibility visibility for aircraft in the world. The HUD RVR takes off at 75 meters, which can effectively reduce the impact of low-visibility weather such as fog and haze on passenger travel. It can better solve the problem of aircraft departure under the conditions of low visibility of Daxing Airport, and further improve the normality of flights. Technical capacity guarantees that there are only a few airports that take off from the aircraft.

Three stations in Beijing and Tianjin, the terminal control center will be online

The flight program design is not isolated. If there is a slight change, it may cause a “butterfly effect”. On the surface, only Daxing Airport is newly built, but there are 24 airports in North China that involve adjustment of flight procedures. East China, Central South, Northwest China There are 9 in the Northeast.

In order to ensure the smooth progress of the test flight, the North China Air Traffic Control Bureau opened the West Tower for the first time. The West Tower Tower is 70.3 meters high and has a total construction area of ​​3795 square meters. It is the commanding height of Daxing Airport. The tower is equipped with functional rooms such as the tower control room, the station control room, the equipment maintenance ring, and the equipment room. The West Tower will assume the air traffic control command after sailing.

Like the Capital Airport, in addition to the West Tower, the East Tower (including the subsidiary business building) is located in the flight area of ​​Langfang Airport in Hebei Province, with a tower height of 73.6 meters.

In order to meet the operational needs, the North China Air Traffic Control Bureau has built a terminal control center for Daxing Airport, which will become the country’s largest terminal control center, and coordinate the entire terminal area. Equipment installation and commissioning are currently underway and is expected to be officially put into operation in August.

Your ticket for the: Daxing Airport's first real machine test flight completed, what it means – Sina.com