On the morning of May 13, after completion, it will be the largest airport in the world, and the first Daxing International Airport in Beijing, which was ranked as the “Seven Wonders of the New World” by the British “Guardian”, will conduct a real test flight for the first time. China Southern Airlines, China Eastern Airlines, Air China and Xiamen Airlines sent their own models A380, A350-900, B747-8, B787-9 and so on.

This is the first time that a test flight was conducted with a real machine after a successful award landing on January 22, 2019.

Then other models also landed on the runway, the scene picture ↓↓↓

The test flight is of great significance to the opening of the airport. After the official approval, the Daxing Airport will be able to sail smoothly.

So, what are the characteristics of the flight test aircraft, and what are the amazing black technologies behind Daxing Airport? Come and see it together!

What are the passenger planes for this test flight?

The China Southern Airlines A380, China Eastern Airlines A350-900, Air China Boeing 747-8 and Xiamen Airlines Boeing 787-9 passenger aircraft participated in the Beijing Daxing Airport test flight, which are the models of various airlines.

Because there are differences in the models of the aircraft that take off and land, the models sent by the four airlines represent different take-off weights and wingspan models.

The Boeing 787-9 passenger aircraft has a maximum takeoff weight of 247 tons and a wingspan of 60 meters.

China Southern Airlines A-380 is currently the world’s largest passenger aircraft, with a maximum takeoff weight of 575 tons, a wingspan of 79 meters, and a take-off distance of 2,900 meters.

How big is Daxing Airport?

Daxing Airport is located on the south central axis of Beijing. It is basically the same distance to Beijing, Xiong’an and Tianjin. It belongs to a super-large international aviation hub between Daxing District of Beijing and Langfang City of Hebei Province. All of them will become the largest in the world. Airport port.

There are 7 runways planned and designed in the airport. It is estimated that by 2040, the passenger flow will reach 100 million passengers, the aircraft will take off 800,000 flights, and the terminal area will reach 1.4 million square meters.

By 2050, the airport will fully construct all reserved control land. It is estimated that passenger throughput will reach 130 million passengers, aircraft take-off and landing will be 1.03 million, and the number of runways will reach 9.

Civil aviation usually uses numbers plus letters to indicate the flight zone level of the runway.

What is the construction scale of Daxing Airport?

In order to achieve ultra-large-scale personnel and aircraft throughput, Daxing Airport has adopted a radial hexagonal layout. Thefive corridors have 82 boarding gates. Passengers walk from the center of the terminal to any boarding gate for no more than 8 hours. minute.

1. Theroof of the airport adopts irregular steel structure with atotal projectedarea of ​​360,000 square meters, a maximum diameter of more than 1.1 kilometers, and an seismic fortification intensity of 8 degrees. It is also the world’s largest single-isolated building.

2. In order to achieve super strong isolation, the entire terminal building uses1,320 sets of isolation devices, each with a diameter ranging from 1200 mm to 1500 mm, and more than 100 viscous dampers.

Assuming an earthquake, the first thing to ensure is that the terminal structure is intact, and the second is to ensure that the equipment and other instruments are operating normally.

4. The roof of the terminal building isa 180,000 square meter full roof structure. A total of 12,800 pieces of glass are used toform a free-form roof.

Among them,no two of the 8,000 roof glass are the same, so engineers need to accurately locate the three-dimensional coordinates of each glass.

What black technologies are used in Daxing Airport?

1. The robot receptionist with certain intelligent technology can provide passengers with flight consultation and other services.

According to the design,the system can process about 30,000 pieces of baggage per hour, and can track the position of the baggage all thetime, which will greatly ease the pressure on Beijing passengers. 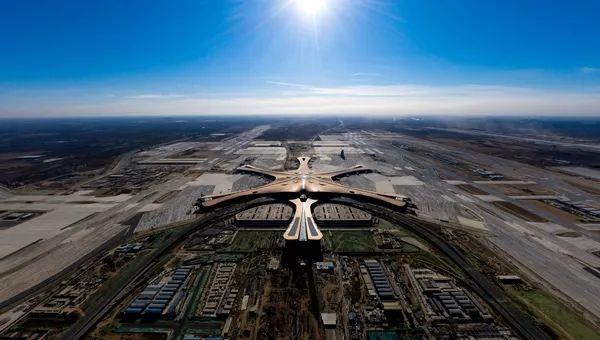 The construction of Daxing Airport reflects China’s massive black technology in the field of infrastructure construction, which is one of the miracles of modern architecture.

Thank you for your love
cnBeta

Your ticket for the: First of the Seven Wonders of the New World: The World's Largest Airport, Beijing Daxing International Airport Secret – IT & Transportation – cnBeta