Party newspaper: “The United States suffers from loss” can't stand up and impose tariffs to harm the interests of both sides – Sina.com 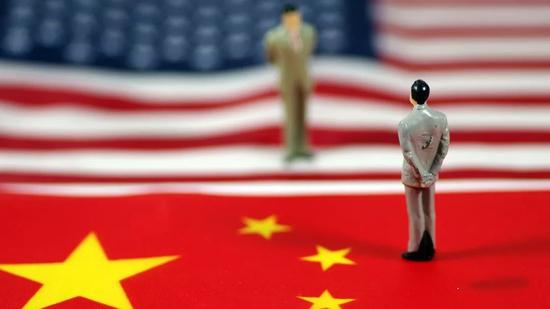 The eleventh round of China-US high-level economic and trade consultations ended. On May 12th, Renmin University of China held the “Sino-US Trade Relations Symposium”. The experts at the meeting expressed that cooperation is the only correct choice between China and the United States. The agreement between the two sides must be equal and mutually beneficial. On the major principle issues, the Chinese side Never give in.

“The United States has benefited a lot from Sino-US trade. The US-China Trade National Committee study shows that Sino-US trade saves about 850 US dollars per American household per year, equivalent to 1.5% of American household income.” China Renmin University of China Chongyang Finance Research Wang Wen, executive director of the hospital, said that Sino-US trade has improved the actual purchasing power of the American people, especially the low- and middle-income groups. It has also brought business opportunities and profits to American companies and created a large number of employment opportunities. Some Americans claim that the “American loss theory” is confusing.

Wang Wen analyzed that on the one hand, the Sino-US trade deficit was overestimated. According to the statistical working group composed of experts from the Ministry of Commerce of China and the United States, the US official trade deficit with China is overestimated by about 20% every year. “More importantly, the United States restricts the export of high-tech products to China and artificially expands. The deficit has severely curbed trade balance. On the other hand, the trade deficit is not only beneficial to the Chinese side but also to the US. “Because of the different international division of labor between China and the United States in the global value chain, the United States has actually acquired most of the profits of the industrial chain.” Wang Wen said that it is not correct to think that the surplus will be cheaper and the deficit will be lost.

Chen Wenling, chief economist of China International Economic Exchange Center, did not agree with the US’s repeated request for China to expand its imports from the United States and even require China to commit to specific amounts. She believes that the essence of international trade is the process of seeking matching between market demand and market supply through the market. “The expansion of imports must be in line with reality. We need things such as high-tech products, and the US does not sell. So the high purchase amount is used. What kind of goods to satisfy? Can’t you buy strong ones?”

Can the maintenance of tariffs safeguard US interests? Gao Lingyun, a researcher at the Institute of World Economics and Politics of the Chinese Academy of Social Sciences, said that in the short run, Chinese exporters may bear a certain proportion of tariff burden based on their relative market position and product demand elasticity; but in the long run, if the commodity is difficult to replace and mainly By relying on imports from China, the increased tariffs will be mainly borne by US importers or consumers. For example, since the United States imposed tariffs on imported washing machines last year, the average price of washing machines in the US market has risen by 12%.

As for the US accusation that China promised to “regress”, Wei Jianguo, deputy director and executive deputy director of China International Economic Exchange Center, bluntly said that this was “a fight,” and the previous consultations, and finally the United States. In response to the US accusation of “China’s lack of trust and failure to fulfill a series of commitments made at the time of WTO accession”, experts believe that in fact, China not only earnestly fulfills its commitment to join the World Trade Organization, but also actively expands market opening through unilateral tax reduction. By 2010, China’s cargo tax reduction commitments have all been fulfilled, and the total tariff level has dropped from 15.3% in 2001 to 9.8%.

The Chinese economy has great resilience, the key is to do your own thing.

On May 10th, the US has raised the tariff on 200 billion US dollars of Chinese exports to the United States from 10% to 25%. Experts believe that the Chinese economy has great resilience and resistance to stress. “The Chinese side’s strength is not only from the sincerity of the negotiations, but also from the resilience of China’s economic development.” Wei Jianguo said.

China’s economic growth is stable. In the first quarter, China’s gross domestic product (GDP) was about 21.3 trillion yuan, which was 6.4% higher than the same period of the previous year. The GDP growth rate remained at 6.4%-6.8% for 14 consecutive quarters. “Not long ago, the International Monetary Fund raised China’s economic growth forecast by 0.1 percentage points to 6.3%. China has become the only country in the world’s major economies to be expected to raise its economic growth rate. The central government has proposed to stabilize employment and stabilize finance. Stabilizing foreign trade, stabilizing foreign investment, stabilizing investment, and stabilizing expected work are the magic weapons for China’s current macroeconomic stability. “The researcher of the National Development Institute of Renmin University of China, and the deputy dean of the School of Economics, Wang Jinbin, said.

The Chinese market has huge demand. In the first quarter, the contribution of final consumption expenditure growth to economic growth was 65.1%, and domestic consumption remained the main engine of China’s economic growth. “This year, the transformation of new and old kinetic energy has been further accelerated, new industries have flourished, new formats have emerged, innovation and entrepreneurship have increased, and corporate vitality has continued to increase. The Chinese economy has successfully resisted the impact of various downside risks, and market confidence has been greatly enhanced.” China Yan Jinming, executive director of the National Development Institute of Renmin University, said.

China’s economic outlook is optimistic. In recent years, deepening the structural reform of the supply side has achieved positive results, and promoted a virtuous cycle of economic operation into price recovery, cost reduction, profit improvement, and confidence enhancement. Yu Chunhai, a researcher at the National Development Institute of Renmin University of China and deputy dean of the School of Economics, said: “In the past, while the Chinese economy maintained steady growth, both the supply and demand have improved in quality, improved in structure, and economically endogenous. Significantly enhanced, the economy has continued to improve. For China, the most important thing is to do your own thing.”

Adding tariffs cannot solve the problem, and China and the United States have huge space for cooperation.

Today, with the continuous deepening of globalization, the economic interdependence between China and the United States has been continuously strengthened, and it has long been difficult to share interests. Economic and trade relations are the “ballast stone” and “propeller” of Sino-US relations. In 2018, even with the escalation of trade friction and protectionism, Sino-US economic and trade relations are still close, bilateral trade volume exceeds 630 billion US dollars, two-way. The investment stock exceeds $240 billion.

“China and the United States have huge bilateral interests. The Americans also see very clearly that the addition of tariffs cannot solve the problem,” said Liang Ming, director of the Institute of Foreign Trade of the International Trade and Economic Cooperation Institute of the Ministry of Commerce.

“We live in the same world, and cooperation is the only correct choice for the two big countries in China and the United States,” said Zhang Yansheng, a member of the National Development and Reform Commission’s academic committee and senior researcher.

“Cooperation is the right choice, but cooperation is also principled.” Yan Jinming believes: “The agreement between China and the United States must be equal and mutually beneficial. China will never give in on major issues of principle. China’s three core concerns must be Solution: First, cancel all tariffs. Second, the number of trade purchases must be in line with reality. The third is to improve the balance of the text.”

Your ticket for the: Party newspaper: “The United States suffers from loss” can't stand up and impose tariffs to harm the interests of both sides – Sina.com

Party newspaper: “The United States suffers from loss” can't stand up and impose tariffs to harm the interests of both sides – Sina.com