People's Daily: This is the attitude of China! – Sina

This is the attitude of China! 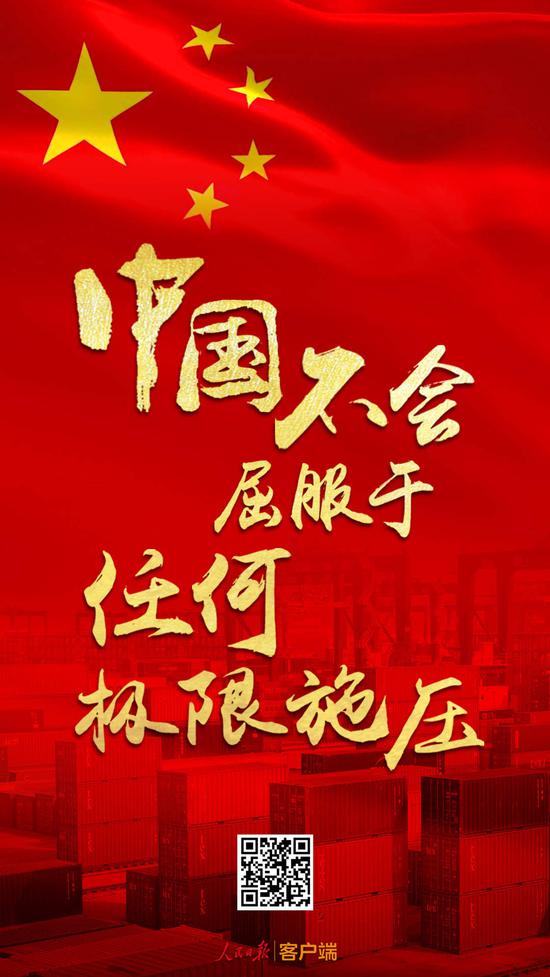 People’s Daily Bell: China will not yield to any extreme pressure

China has always promoted Sino-US economic and trade consultations with a highly responsible attitude and the greatest sincerity, but will never yield to the extreme pressure of the US and will not compromise on the issue of principle. In particular, the US should choose to follow the trend, work in tandem with the Chinese side, work together to solve problems in equal consultations, and create a future on the road to win-win cooperation.

Yunjuan Yunshu, the rain is still sunny, Washington’s changing weather seems to be a narrative. From May 9 to 10, local time, the eleventh round of China-US high-level economic and trade consultations was held in an atmosphere of extra difficulty and sensitivity. The two sides have so far made substantial progress in strengthening intellectual property protection, expanding market access, and promoting bilateral trade balance. However, there are still differences on China’s core concerns. At the same time, the new round of US wars on China’s export of US goods to the United States has been rumbling, and China has clearly stated that it has to take necessary counter-measures.

Throughout the rounds of Sino-US economic and trade consultations, people seem to hear a symphony, although the main melody is faintly discernible, but the reverberant chords sometimes go out of tone and string. The chapters that are eager to cut, the clouds and the waves are inseparable from the economic and trade negotiations. Looking back on China’s accession to the World Trade Organization after 15 years of ruggedness, the GATT Uruguay Round negotiations have been playing for nearly eight years. The Doha round of negotiations started in 2001 has been slow to get on the road… no matter which one, it is It’s hard to travel, and it’s all inevitable. At present, the Sino-US economic and trade consultation has entered this chapter, and can quickly get out of the dilemma, and the whole world is watching.

China has always promoted Sino-US economic and trade consultations with a highly responsible attitude and the greatest sincerity, but will never yield to the extreme pressure of the US and will not compromise on the issue of principle. The Chinese side explicitly requested that all tariffs be abolished to restore bilateral trade to normal; the trade procurement figures should be clearly required to be realistic; the text balance should be clearly required, and the expression must be accepted by the domestic people without prejudice to national sovereignty and dignity.

Initiating trade frictions, the excuse that the US has made is to pursue fair trade. However, the US side ridiculously filtered out an axiom in the negotiation process that fair trade should be “two-way fairness” and there is no fairness without a win-win situation. Both China and the United States have their own core concerns, and core interests are never possible to be transferred. People should not forget that the Sino-US bilateral agreement on China’s accession to the World Trade Organization was the result of 13 years of negotiations. When the two sides toasted, they repeatedly emphasized the golden rule of success – focusing on mutual benefit. Mutual benefit and win-win, mutual understanding and mutual accommodation, seeking common ground while reserving differences, and seeing each other with sincerity, these are the principle elements that have been tested by history and guided the success of negotiations. Regrettably, the US side still can’t afford the golden key of win-win, and can’t get away from the “fair trade” troubles. The US chooses to put pressure on the ground and limit it. At the end of the day, it can only be a good opportunity to solve the problem.

What era has the world entered, and what kind of rising trend has China shown? How much trade opportunity does the US engage in trade frictions? For the answers to these questions, the US has not considered it carefully. Because of the misjudgment of China’s strength, China’s ability, and China’s will, the US side has swept the tariff bar and further escalated the trade friction between the two countries. Is it necessary to push China-US economic and trade relations to a broken crossroads?

The Chinese side resolutely opposes the US tariff increase, and is fully prepared to deal with various situations. China’s calmness, calmness and rationality have aroused widespread concern in the international community. These lines of attention have further explored the foothold of China’s economy. The Chinese economy, which is heading towards high-quality development, has accumulated strong resilience and revitalized vitality. China’s trading partners are all over the world. China is accelerating its move from a big trading country to a strong trading country, consolidating the traditional advantages of foreign trade, cultivating new competitive advantages, and expanding the space for foreign trade development. Sino-US trade frictions cannot stop the pace of China’s development.

Of course, the window of hope for Sino-US economic and trade relations has not been closed and it is impossible to close. The economic and trade teams of the two sides agreed to continue to maintain communication and conform to the wishes of the people. Fu Limin, a well-known expert on Chinese issues in the United States, recently pointed out that the “state governors of all states want to develop trade and investment relations with China as always” and called for the true concern of the American people for China.

In the past, they are all prologues. Over the past year or so, the progress and experience of the economic and trade teams between China and the United States have added new thinking to the development of Sino-US relations. In the face of difficulties, the Chinese people often say that “there is no fear of floating clouds and obscuring the eyes.” The American people often say that “every black cloud is lined with a silver edge.” Looking at the overall situation of Sino-US relations, people can still see hope through the clouds.

Cooperation is the only correct choice. The practice of the establishment of diplomatic ties 40 years ago proves that Sino-US cooperation is the general trend. Maintaining bilateral relations is beneficial to China, beneficial to the US, and beneficial to the whole world. Economic and trade relations are the ballast stones and propellers of Sino-US relations. This is not the fact that several gullies can be subverted. Sino-US economic and trade consultations serve as the historical mission of promoting a new Sino-US economic and trade order that is balanced, inclusive and win-win. For the well-being of the two peoples and for the long-term development of the country, both sides have the responsibility and the obligation to take them seriously. It is not to let the local entanglements trap their hands and feet, but to firmly control the differences and find differences in the spirit of mutual respect, equality and mutual benefit. A solution acceptable to both parties. In particular, the US should choose to follow the trend, work in tandem with the Chinese side, work together to solve problems in equal consultations, and create a future on the road of cooperation and win-win.

Your ticket for the: People's Daily: This is the attitude of China! – Sina

People's Daily: This is the attitude of China! – Sina