The Beijing Newsletter (Reporter Xu Wen) The Asian Civilization Dialogue Conference is just around the corner. The reporter was informed that as of now, there are more than 2,900 registered journalists in the conference, including more than 2,500 domestic media reporters and more than 380 foreign media reporters. The conference news center will start trial operation tomorrow. 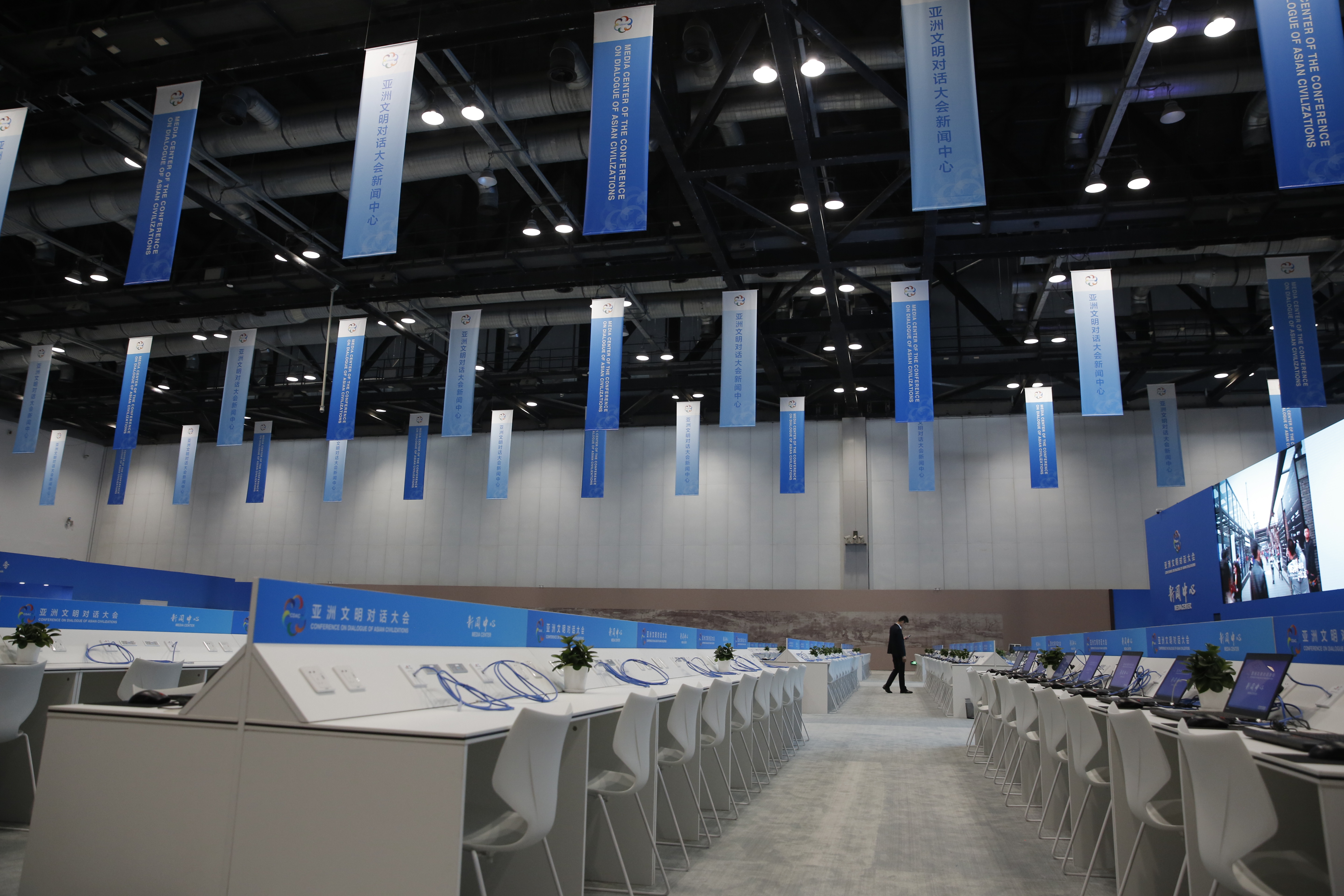 The news center of the Asian Civilization Dialogue Conference is waiting for Chinese and foreign media. Photo by Beijing News reporter Hou Shaoqing

210 laptops for free use

This afternoon, the reporter went to the news center located in the National Convention Center to explore the camp ahead of time. Stepping into the E1 and E2 exhibition halls of the National Convention Center, the news center with a total area of ​​about 11,000 square meters is open and bright, and the functional areas are arranged in an orderly manner.

The person in charge of the Yawen News Center told the reporter that the spatial layout of the news center is divided into eight functional areas, namely the integrated service area, the media public work area, the media-specific work area, the press release area, the MCR operation area, and the cultural display area. Operational support office area, media catering and tea break area.

Among them, the size of the two press conference halls, respectively, can accommodate 260 and 150 journalists to participate in the press conference; the media public work area is more than 2,200 square meters, and the reporter station is 546. The reporter saw that many new laptops were arranged in a row and could be used at any time. According to reports, the work area provides 210 sets of Chinese and English public laptops to meet the needs of media reporters on-site. 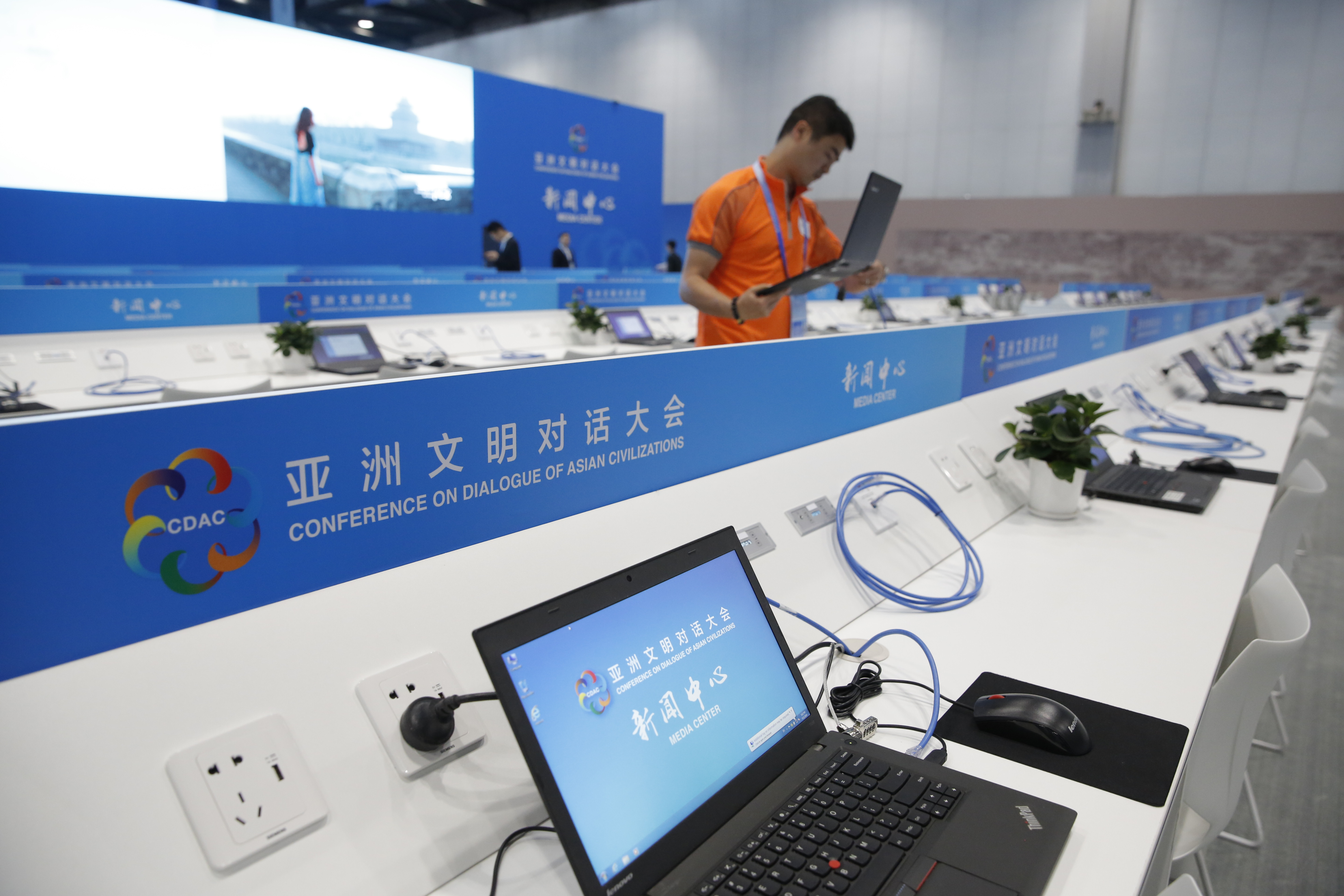 Not far from the work area, the news center dining area with a total area of ​​about 1,500 square meters can accommodate 500 people at the same time. In order to avoid the queuing phenomenon of reporters during the peak period, the National Convention Center has also carefully designed 6 meals and extended the meal time. Up to 3 hours.

In addition, the news center sets up an independent clinic, allocates medical supplies such as instruments, medicines, and clinics, and selects medical personnel to provide medical security services.

The news center is not only well-equipped, but also all equipment is “high specification.” According to reports, the news center is equipped with broadcast-level public signal playback equipment, professional office equipment and high-speed network with a total bandwidth of 6G, providing media services such as radio and television services, official photo services, and conference event information services. Apply the latest technology in public signal transmission, communication network, etc., to provide registered journalists with a more efficient and convenient working environment.

In addition, the public signal master control system will increase the parallel forum distribution system according to the actual situation of the conference, and can realize real-time scheduling and distribution of six parallel forums at the same time. The system has high security and good stability. 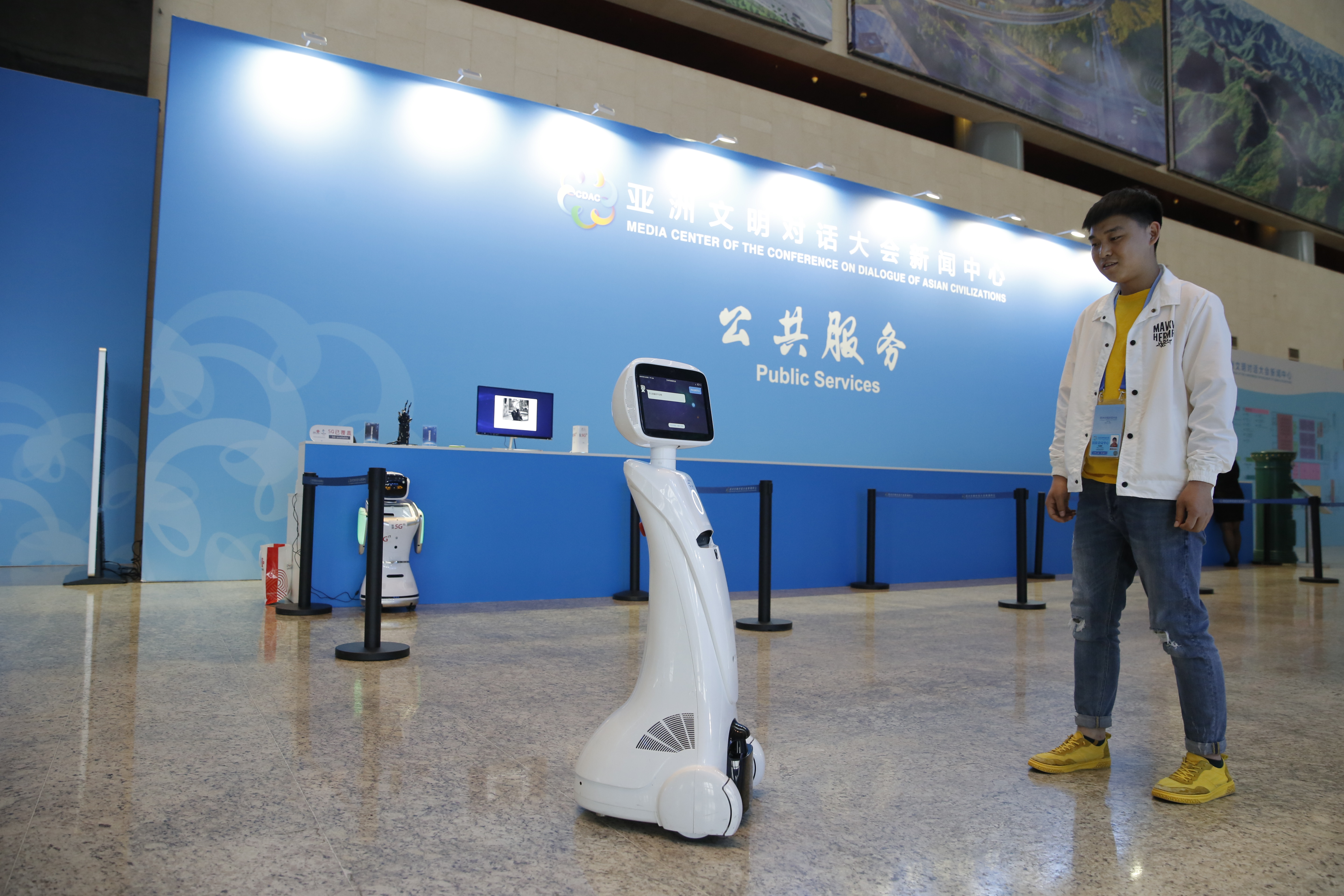 The robot “Amy” will act as a welcome messenger. Photo by Beijing News reporter Hou Shaoqing 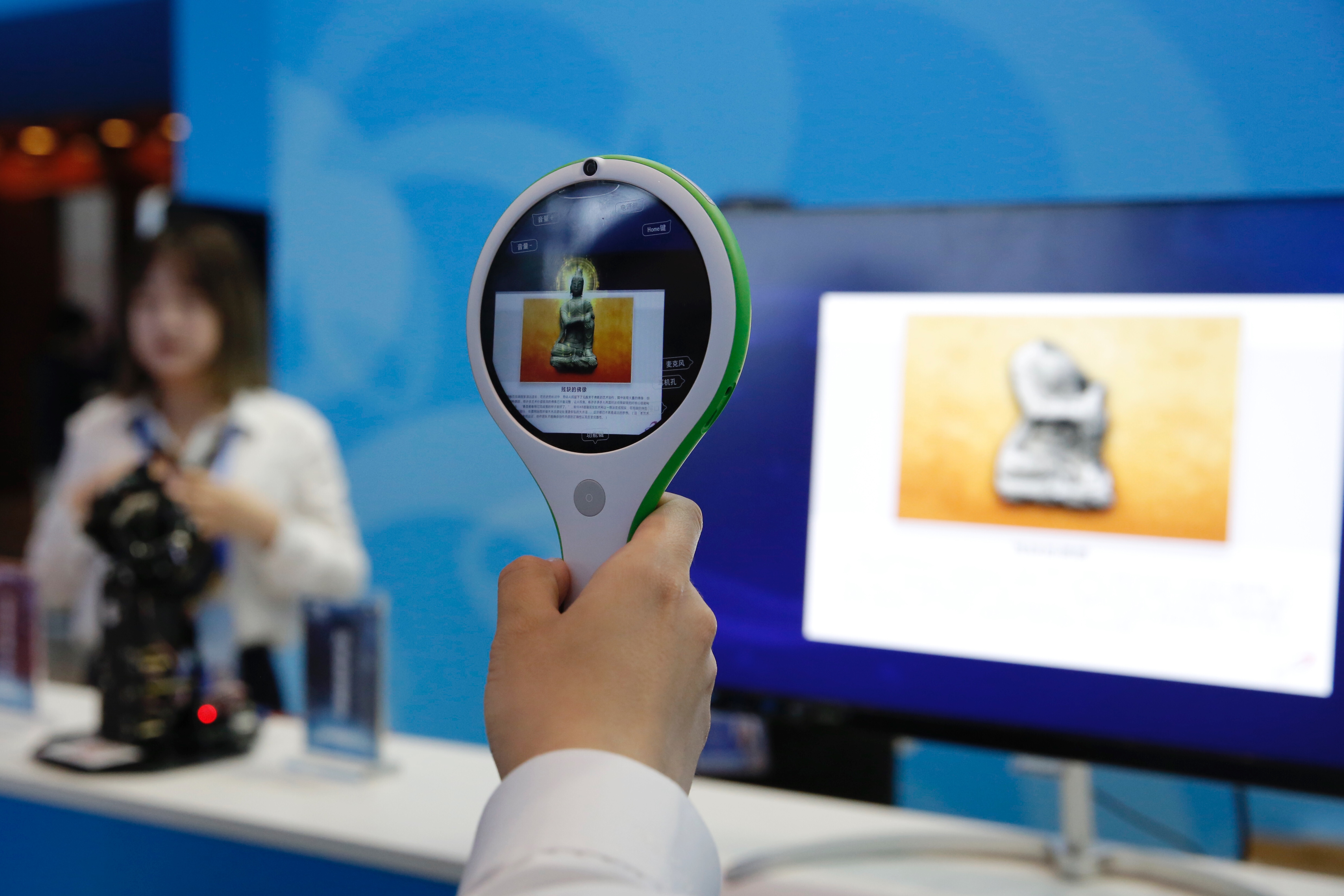 In the AR Museum, the restored artifacts can be viewed through the “Electronic Magnifier” device. Photo by Beijing News reporter Hou Shaoqing

The person in charge of the Yawen News Center told the reporter that the robot “Amy” has the ability of real-time map construction and positioning navigation technology, accurate face recognition and big data analysis, and can obtain the conference information through voice dialogue.

The news center also has an AR museum where the experiencers can view the restored artifacts through the “Electronic Magnifier” device. The immersive augmented reality interactive experience zone also attracted many journalists’ experience, wearing head-mounted VR equipment, and 10 panoramic images of China and Beijing’s key areas were displayed in front of the scene.

In the walk-in group interactive area, the experiencer stands in front of the green curtain, and chooses the famous Asian attractions such as the Great Wall as the background of the photo. Pressing the shutter, a travel photo is freshly released. The captured images can be printed on-site or electronically via scan code for easy collection and sharing on social media.

In addition, the news center is equipped with the latest face recognition electronic lockers. The reporter experienced that the access to the item only needs to stand in front of the camera, and the face recognition automatically pops up through the back door. The whole process takes only two or three seconds, which is convenient and safe.

The intangible cultural heritage inheritor will teach on the spot

The reporter noticed that the news center has a strong cultural flavor and Asian elements can be seen everywhere.

In the E2 exhibition hall of the Media Public Work Area of ​​the Press Center, the huge Beijing elemental wall is painted with ink, and the city’s civilized landmarks such as the Great Wall, Temple of Heaven, Summer Palace, Bird’s Nest, Water Cube and National Grand Theatre are displayed one by one; The side wall surface is painted in the Song Dynasty “Qingming Shanghe Tu”; the media restaurant wall is decorated with Chinese traditional “Mei, Lan, Bamboo, and Chrysanthemum” four landscapes.

The tea break area of ​​the news center also has a Beijing style exhibition area. By setting up a real scene and setting up classical furniture, the atmosphere of Beijing Hutong and Siheyuan is created, so that media reporters can immerse themselves in the atmosphere of “Old Beijing” during the coffee break.

The news center has an intangible cultural heritage interactive zone. At that time, four groups of intangible cultural heritage inheritors from Beijing will be invited to perform traditional Chinese paintings, traditional jade stone palace flowers, rabbit painting, and soft pottery craft production for Chinese journalists. Media reporters can experience the production of non-legacy and gain a deep understanding of the traditional culture of Beijing. The results of the live interactive experience of the reporters can be taken away as souvenirs.

The reporter also found a photo background wall in the E1 exhibition hall. Based on the Chinese oracle bone text, the cuneiform characters of the two rivers and the Arabic numerals, the Chinese calligraphy, script, cursive, script, and calligraphy are used to write one by one. “civilization”. On the left side of the wall, the names of the participating countries and organizations are “printed” on the wall with Chinese impression art.

The staff is setting up a display area that introduces the regional culture and scenic spots of China and Beijing. Photo by Beijing News reporter Hou Shaoqing

The whole building is made of environmentally friendly materials.

As the session approached, volunteers in uniforms in the press center were preparing for the intense work. According to reports, the news center has a total of more than 230 volunteers, and has completed the induction training.

In order to strengthen the security service guarantee, the conference also deployed a security service network in the news center. A communication base station safety signal independently developed by a famous enterprise in Beijing Zhongguancun can cover a radius of 10 kilometers, and receive the temperature, smoke, etc. in the news center in real time within 24 hours. Signal transmission from the sensor.

At the same time, artificial intelligence technology has also been added to it, and intelligent analysis and analysis of factors such as flow density and personnel distribution have been carried out to strengthen the security protection wall of the news center.

From May 5th, the press center’s telephone number and consultation email will be opened, and questions from domestic and foreign media will be accepted and reservations will be made for media-specific work rooms.

The website of the AWC News Center (http://mediacenter.2019cdac.com) was officially launched on April 25. The website is divided into Chinese and English versions and is adapted to the mobile client (Private News Center) to provide convenient, fast, secure, and comprehensive information services for Chinese and foreign journalists.

During the conference, the news center recommended Beijing Wuzhou Hotel, Beichen Huiyuan Hotel Apartment VIP Building and Ramada Plaza China as the media hotel. The three hotels have a free media shuttle to facilitate the return of reporters to the airport, hotel and venue.

Independent medical offices were set up in three media hotels to arrange medical supplies such as equipment, medicines, and clinics, and medical staff were selected to carry out 24-hour medical security services (two doctors and two nurses in each clinic). The ambulance outside the media hotel is on duty and is responsible for transporting patients.

In addition, the conference also set up a forensic center for registered journalists in the first floor of the Wuzhou Grand Hotel to facilitate domestic and foreign journalists to obtain documents.

Your ticket for the: The Asian Civilization Dialogue Conference News Center has been put into trial operation – Beijing News