The city's famous garden cultural relics will be assembled for the first time, bringing you to explore the exhibition site in advance – Beijing News

The “Garden Saying – Beijing Classical Garden Cultural Relics Exhibition” was just around the corner and the staff was working on the exhibition.

The Beijing News (Reporter Zhou Yi), jointly hosted by the Beijing Park Management Center and the Capital Museum, will be opened on May 18th at the “Garden Theory – Beijing Classical Garden Cultural Relics Exhibition”. 190 pieces/set of cultural relics from 11 municipal parks such as the Summer Palace, Tiantan Park and Beihai Park will “go out” of the park and be displayed on the large scale for the first time. The reporter saw on the scene of the exhibition hall on May 11 that the exhibition work was proceeding in an orderly manner and nearly half of the cultural relics had entered the exhibition hall. The person in charge of the site introduced that it is expected that all the exhibition work will be completed on May 15. 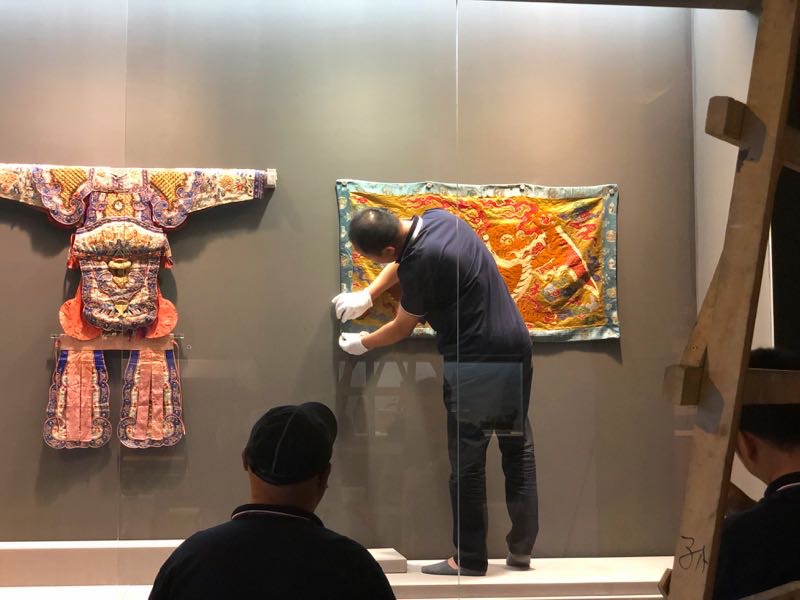 The staff is working very closely on the exhibition.

The relevant person in charge of the Municipal Park Management Center introduced that the exhibition will be divided into “flat land and sea, back to Liaojin”, “the temple and the temple, the combination of heaven and man”, “three mountains and five gardens, shifting to the ground” and “hundred years park”. The four major plates of the old and new look showcased 190 pieces/sets of cultural relics and more than 50 pieces of materials such as bronzes, porcelain, jade, lacquerware, calligraphy and painting, silk fabrics, and enamel products. The historical, cultural, ecological and social values ​​of the famous garden in Beijing’s 800 years of urban construction and change show Beijing’s protection and inheritance of the garden cultural heritage.

The reporter saw on the scene on the afternoon of the 11th that in the 1,200 square meters exhibition hall, the staff members were working closely in the exhibition. Among them, the part of the exhibition hall has already taken shape, and classical garden elements such as window leakage, plant point scenery and Taihu stone are concentrated here. In addition, some of the exhibits of the “Three Hills and Five Parks” section have also been included, including “heavyweight” cultural relics such as the red sandalwood inlaid 珐琅yunlong pattern seven-screen Arhat bed, which is about 3 meters long and 1.5 meters wide.

Qin Lei, the person in charge of the special exhibition of the city park management center and the deputy director of the Summer Palace, told the reporter that the specifications, grades and excitement of the exhibits were very high. There were only 13 first-class cultural relics, and many of them were the first. It is especially important to walk out of the park and even show it for the first time to ensure their safety. Since the beginning, the curatorial team has formulated relevant plans to ensure the safety of cultural relics, and has made detailed considerations on the temperature, humidity and lighting of the exhibition hall. “At the same time, due to the exhibition, we have customized the packaging for each piece of cultural relics, so that the packaging and the exhibits are closely matched, and provide specific temperature and humidity conditions to ensure the safety of the cultural relics during the transshipment process.”

For some special cultural relics such as silk fabrics, the constant temperature and humidity machine was specially used in the exhibition process. The most important cultural relics in this exhibition–the Qing dynasty dynasty Machine. The reporter saw on the scene that the huge figure shaft with a length of nearly 8 meters was installed in a large glass showcase occupying more than half of the exhibition area. At present, the showcase has been closed, and the staff carried out the final painting work on the periphery of the showcase. The reporter learned that this showcase is a box specially designed for this cultural relic. In order to prevent damage to cultural relics, the display panel is also covered with a layer of acid-free soft paper for protection.

The “Dance of the Buddha’s Silk Buddha” from the Summer Palace was exhibited for the first time. The curator specially customized a large glass showcase.

The rosewood inlaid arhat bed consists of dozens of components, all of which are traditional enamel structures. How do you move from the Summer Palace to the exhibition hall? According to reports, the curatorial team invited a full-time furniture relics repairer to disassemble, four or five staff members cooperated, disassembled more than 20 components of the entire bed, packaged one by one, coded and then boxed, the whole process It takes more than one hour.

In addition, the reporter learned that the “Hua Shihubo painted Cixi oil portrait” from the Summer Palace, and the precious collections from the Temple of Heaven’s “Ming Dynasty gold and bronze bells” will also be unveiled at the exhibition. On the day of the opening ceremony, there will also be a performance of “Tiantan Kagura Department Zhonghe Yule”.

“People in Beijing often go to city parks. They may know what the park has and what buildings, but there are very few people who really know the rich collection of cultural relics in these parks.” Qin Lei said that he hopes to deepen the public’s participation in this exhibition. The understanding of Beijing Classical Garden has a comprehensive understanding of the different functions and values ​​of Beijing gardens in history and inheritance.

Your ticket for the: The city's famous garden cultural relics will be assembled for the first time, bringing you to explore the exhibition site in advance – Beijing News

The city's famous garden cultural relics will be assembled for the first time, bringing you to explore the exhibition site in advance – Beijing News